FPGA or GPU: Which One For Machine Learning Applications?

FPGA or GPU: Which One For Machine Learning Applications?

There is a lot of buzz around the use of FPGAs (Field-programmable Gate Array) as an alternative to GPUs for machine learning applications. But how do they compare? Are there any fundamental differences between them, or are some people overstating their case for nothing?

This article will provide a bit of background on each technology and then dive into their use cases to see if one is better than the other. Let’s start by revising what machine learning is.

In a nutshell, machine learning is a way of teaching computers to learn without being explicitly programmed. Computers are taught to learn patterns from data, identify trends and make predictions.

It is technology, a learning system based on an algorithm that makes AI possible by providing a formula that tells the system how to solve particular problems by looking at historical data.

Is AI, Machine Learning, And Deep Learning The Same?

Machine learning is both a subset of artificial intelligence (AI) and a technique used in AI that focuses on making computers smarter. Deep learning, meanwhile, is a subset of machine learning that aims to give computers human-like cognitive abilities such as object recognition and language translation.

When it comes to applications in the machine learning space, the most popular option is to use a GPU — a graphics processing unit — specially designed to tackle data-parallel calculations.

But what if you’re looking at implementing your algorithm design on an FPGA instead?

Each approach has some pros and cons that make them both viable alternatives depending on your implementation needs. Here’s how they stack up against one another. 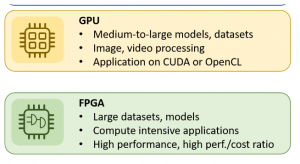 The graphics processing unit or GPU is a specialized graphics chip designed to accelerate the creation of images in video games and computer-aided design. The GPU’s parallel structure makes it more effective than the traditional CPU for algorithms where large blocks of data are processed in parallel. GPUs are best suited for larger, more intricate data models. They are primarily used in image processing, video editing, and gaming applications.

GPUs are great for parallelizable tasks, or that can be broken up into chunks that run independently of one another. It includes tasks like video rendering, ray tracing, and cryptography. However, GPUs aren’t ideal for jobs that rely on branches in the code. A branch is a decision-making point in a program as to which path to take based on conditions in the program.

One of the more modern trends in embedded electronics is The Field Programmable Gate Array (FPGA). An FPGA is a semiconductor device that can be programmed to suit an individual application.

Programmers program FPGA chips to do many different operations, which is why they are used for mining cryptocurrencies – this allows them to mine multiple cryptocurrencies at once. FPGAs have a lower cost per hash rate than ASICs, making them more profitable for miners. And unlike GPUs, FPGAs can use both SHA-256 and Scrypt algorithms.

FPGAs can be reprogrammed in the field, but they are more expensive than their ASIC or GPU competitors.

Comparison Between FPGA and GPU 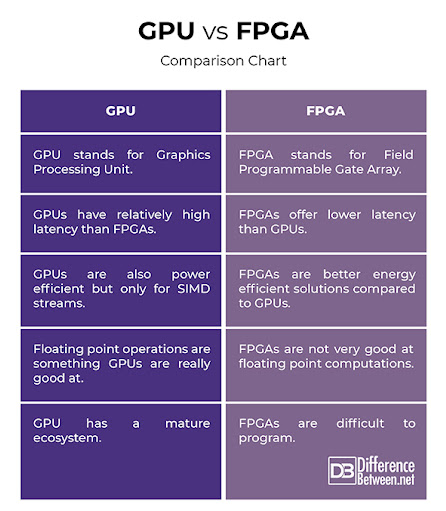 How to choose FPGA or GPU in Machine Learning?

Choosing the Right Processor for Your AI / Machine Learning Workloads

Depending on your application needs and computing environment, choosing between FPGA and GPUs is relatively straightforward when you make data-driven decisions: you simply evaluate:

First, let’s compare and contrast the GPU and FPGA features and then decide which is best for machine learning.

1)GPU (graphics processing unit) is an electronic circuit designed to rapidly manipulate and alter memory to accelerate the creation of images in a frame buffer intended for output to a display screen. An FPGA (field-programmable gate array) contains an array of logic gates that the customer or designer can configure after manufacturing via a programming language, rather than being fixed by a mask at the time of manufacture.

3) GPUs are better than FPGAs for many AI applications, such as image recognition, speech recognition, and natural language processing. However, GPUs aren’t energy efficient when doing matrix operations, so they’re not the best option for machine-learning computations involving large data sets. GPU is explicitly designed to handle specific tasks, while FPGA is designed to do any job you want.

4)The computing power of a GPU is measured in gigaFLOPS (billions of floating-point operations per second). A common mid-range graphics card, such as an NVIDIA GeForce GTX 1050 Ti, delivers 0.35 TFLOPs performance, which is good. Such is not the case with FPGA.

5) FPGAs are more difficult to design than GPUs. Fabrication for FPGAs is more complicated; a mistake anywhere can destroy the chip. It is also harder to debug and optimize the code, making it harder to scale to large sizes. GPU hosting is much cheaper.

FPGAs are difficult to program, which is why they’re not as common among hobbyists. However, they can be reprogrammed if needed, which is why they’re popular with miners who may need to switch algorithms when a new cryptocurrency emerges. FPGA can do multiple (parallel) operations simultaneously, while GPUs cannot.

FPGAs have shown a lot of potential as the processing power for machine learning algorithms in developing new deep neural networks. FPGAs are flexible to use for implementing DNNs that utilize binary, ternary, and sometimes custom types of data. The power efficiency and adaptability to the parallel irregularity of sparse DNN algorithms could make FPGAs an excellent option for machine learning applications.