What is Long Short-Term Memory (LSTM)?

What is Long Short-Term Memory (LSTM)?

Predicting the future used to be a headwater of intrigue and debate. It has become a task limited only by the number and depth of data thanks to human developments. This task of foresight is becoming more accessible since we live in a civilization that generates data at an exponential rate. The term LSTM will inevitably crop up as you delve more into data-driven predictions. It is an abbreviation that stands for Long Short Term Memory, like with many other tech ideas. With the recent advancements in data science, it has been discovered that LSTM is the greatest solution for solving forecasting challenges. Let’s learn more about what exactly is LSTM and how it works.

Background – The Issue with RNNs

The vanishing gradient problem affects recurrent neural network during back-propagation. Gradients are values that are utilized to update a neural network’s weights. The vanishing gradient problem occurs when a gradient decreases as it back propagates through time. When a gradient value falls below a certain threshold, it no longer contributes much to learning. Due to insufficient, decaying error backflow, learning to store information over long time intervals via recurrent backpropagation takes a long time. Layers that get a modest gradient update in recurrent neural networks stop learning. Those are frequently the first layers to appear. RNNs can forget what they’ve seen in longer sequences because these layers don’t learn, resulting in short-term memory. As the gap length increases, RNN does not deliver an efficient performance. If you’re trying to predict something from a paragraph of text, RNNs may leave out critical information at the start.

Let’s assume you recall a prior scene when viewing a video or you know what happened in the previous chapter while reading a book. RNNs work in a similar way; they remember earlier information and use it to process the current input. Because of the shrinking gradient, RNNs are unable to recall long-term dependencies. Hochreiter, a former Ph.D. student of Schmidhuber, first extensively evaluated these challenges on Schmidhuber’s RNN long time lag project (1991). The main issues of typical RNNs are solved by a feedback network termed “Long Short-Term Memory” (LSTM, Neural Comp., 1997). LSTMs are specifically developed to address the problem of long-term dependency. They don’t have to work hard to remember knowledge for lengthy periods; it’s like second nature to them. From several perspectives, the LSTM model has a collaret over the recurrent neural network, traditional feed-forward neural networks, hidden Markov models, and other sequence learning approaches due to its relative insensitivity to gap length.

Long short-term memory (LSTM) is a deep learning architecture based on an artificial recurrent neural network (RNN). Long Short-Term Memory (LSTM) was created primarily for addressing sequential prediction issues. The LSTM networks can learn order dependence in sequence prediction challenges. This is a behavior that is required in a variety of complicated issue areas, including machine translation, speech recognition, and others. LSTM Network is an enhanced RNN that permits information to be stored indefinitely. It can deal with the vanishing gradient problem that RNN has, as discussed earlier. 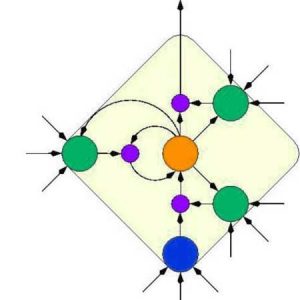 Long short-term memory’s chain-like architecture allows it to store data for extended periods of time. They have neurons to execute computation, just like other Neural Networks, but they’re called memory cells or simply cells in LSTM. Weights and gates are stored in these cells, with the gates serving as the LSTM model’s distinctive feature. Within each cell, there are three gates – the input gate, forget gate, and output gate. A cell, an input gate, an output gate, and a forget gate make up a standard LSTM unit. The three gates control the flow of information into and out of the cell, and the cell remembers values across arbitrary time intervals.

Language Modelling, Image Captioning, Machine Translation, and Question Answering Chatbots are just a few of the well-known uses of LSTM. LSTM has feedback connections and it can handle not only individual data points (such as photos) but also complete data streams (such as speech or video). LSTM has input links, which means it can handle a large grouping of data. This finds use in machine translation, speech recognition, and other fields.

LSTM can be used for tasks like handwriting recognition, and anomaly detection in network traffic or intrusion detection systems. Weather forecasting, stock market forecasting, product recommendation, text/ image generation, and text translation are some other examples of its applications. It is also used for time-series data processing, prediction, and classification. Because there might be lags of undetermined duration between critical occurrences in a time series, LSTM networks are well-suited to categorizing, processing, and making predictions based on time series data.

Also Read: A US based firm uses prediction engine for cryptocurrency forecast and trading

LSTM has revolutionized machine learning and AI, and it is now available to billions of people through the companies like Apple, Google, Microsoft, and Amazon. LSTM blocks are used by the recurrent neural network to offer context for how the program receives inputs and generates outputs. RNN makes use of LSTM blocks to evaluate a single word or phoneme in the context of others in a string, where memory can help filter and categorize these types of inputs. In general, LSTM is a well-known and widely used idea in the development of RNN.