How does Means-Ends Analysis work?

How does Means-Ends Analysis work?

An artificial intelligence-oriented technique on the basis of which the model can search the directory. The searching platform used this technique in order to get better results or to limit the search.  It is a very old technique not only found in machine learning, deep learning, or artificial intelligence but also in design problems associated with engineering drawing, dynamics, and statics as well. Mean end analysis is a sort of simulation technique on which the computer, system, or model applied an analysis. The model that has been created in the environment will have all the obstacles from the initial point to the final point. In an article, the author used the term “divide and conquer” for mean-end analysis. A mean-end analysis tool has been used where the bigger target has been divided into smaller ones so that an easy process can be applied on the basis of better strategy as well.

In artificial intelligence, machine learning, and deep learning we have come across different complex computational techniques which are very hard to solve on the very first go. So, to solve them better different developers and researchers have recommended MEA, as in MEA we have divided these giant tasks into smaller ones. The division helps to make better decisions as the model is already trained for such small tasks, also lesser computational power is required, and most importantly if the goal has been achieved in between no more computations have been required. It is also important in AI, as it limits the search, and the model can find the goal more accurately with lesser computational time. This MEA technique has also increased the resolution power so that the work can be solved better as compared to the conventional machine learning and artificial intelligence technique. The other two most important concepts associated with the MEA technique are; that they have defined the goal and provided the right action plan before the execution of the real plan.

A brief introduction earlier helps the basic concept of the mean end analysis. Now the most important part has come which is how this technique works in AI. Following are a few important points associated with the working of mean end analysis are enlisted. 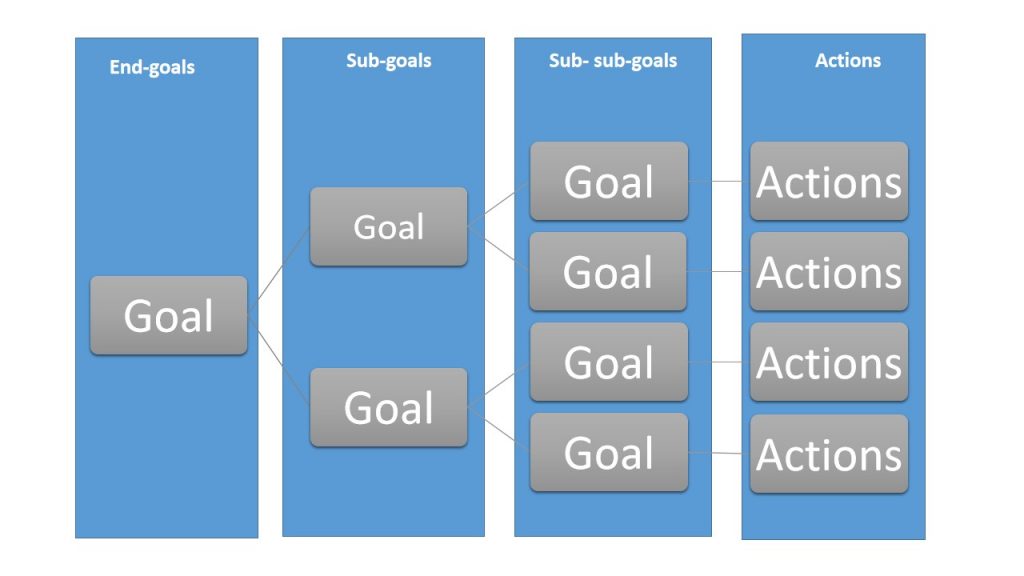 A Brief Visualization of MEA Techniques

An article has shown an example that is associated with psychology but proves the concept of mean end analysis in artificial intelligence as well. The author provides us with an example, if someone wants to travel between two cities, he must have chosen the better path in terms of better roads, weather, and shorter ones. Now each of these better road factors, weather, and the shorter path has now become smaller goals for the person. Now each of them has different importance like better roads are of more importance from drivers’ point of view while traveling to another city, the weather is a mediocre priority factor, and finally, the length of the path has the least priority. So, while solving the problem the driver will always consider the condition of the road even if the shorter path is sacrificed. In this way, the mean end analysis has worked and is usually applied in google maps which gives us better routes by considering different small goals.

There are several advantages associated with this technique a few of them are enlisted as follows.

One of the top artificial intelligence service providers in the USA, Algoscale helps businesses become more agile and intelligent by connecting their disparate data sources and by implementing innovative and efficient artificial intelligence solutions. Algoscale offers businesses assistance in selecting the best platform, creating applications, integrating cameras, and streamlining processes by integrating with other systems in order to gain useful insights and enhance business decision-making. We have more than 7 years of experience in providing computer vision, machine learning, and NLP services.