While working on digital logic there are only two possibilities high or low, 1 and 0, true or false, or any other pairs. But the question arises here what will happen if we need an intermediate state between these two states. For that purpose, fuzzy logic is used. While talking about fuzzy logic (Fuzzy Logic Definition, 2021), it is basically a technique with the help of which one can process the multiple truth values that can come in between 0 and 1 states of conventional digital logic. The fuzzy logic works with the same variable. Fuzzy logic is basically a computational technique that can solve problems having a spectrum of data and heuristics already available. With the help of fuzzy logic, the system becomes able to obtain accurate results. These results are very widely spread over a vast spectrum and with the help of machine learning, and reinforcement learning various conclusions can be obtained from them. The main application areas (Fuzzy Logic Tutorial: What Is, Architecture, Application, Example, 2021) of fuzzy logic are kiln control which mixes cement, microwave oven which adjusts the heat and light inside, and plasma etching with the help of which etching can be done.

The above figure explains the working of a fuzzy logic system. Each of the components is explained in the following steps. (Fuzzy Logic Control System – GeeksforGeeks, 2020)

The technology of self-driving cars is evolving so fast. A lot of research has been carried out in this field. Researchers and experts from different fields work collectively in this field to make a robust system so that these cars can become safe for travel. Similarly, a lot of research has been carried out to increase the speed of such vehicles and other people carried out research about the positioning of the car. In this article, different sources have been gathered which have their work related to fuzzy logic and self-driving cars. A few of them are explained in the upcoming paragraphs.

In an article (Etlik et al., 2019), the team has worked on a fuzzy logic system for self-driving cars. Their work is basically associated with JavaScript as they have made an application. The whole project is basically a simulation based on the basis of which one can implement it on real-time self-driving cars. The main aim of this technical paper is to control the speed and position of the vehicle for this purpose they have made two fuzzy control systems one is fuzzy velocity reference (FVR) and fuzzy position reference (FPR). The paper provides all the details of the design of the system. This paper has been implemented in real-time as well, but the different company has done it and the results of both simulations, and the real-time self-driving cars are the same which means it is groundbreaking research. Adding some machine learning, and deep learning such as racecars will be the future of car racing.

The most important point that is associated with self-driving cars is their braking system. In major cities like New York, London, and Paris number of road accidents extended to an alarming situation, so a robust braking system is required not only for self-driving cars but also for manually operated cars as well in order to save lives and money wasted on such incidents. In an article (Bassey et al., 2019), the author shows the modeling and designing of automatic braking systems in self-driving cars. 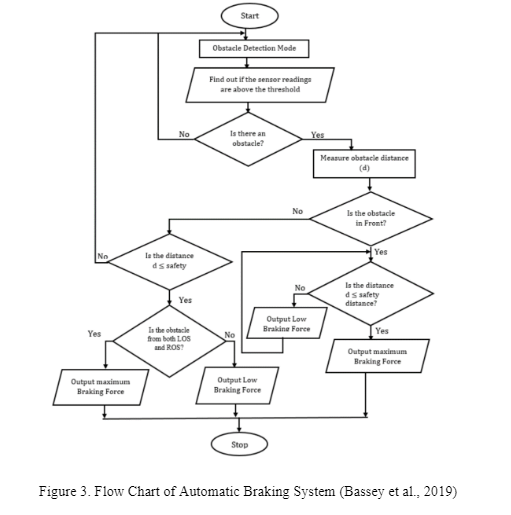 The above figure explains the automatic braking system. As we have observed there are a lot of possibilities associated like we need maximum force brakes at the time, at times we required mild brake and during speed controlling we have needed a very minimal amount of braking so all these outputs combine to make a vast system which works in parallel and hence a system is needed to design with the help of which we can work on multi states with having each state should have more than two logics like there is not only high or low, there should have been multiple in-between states with the help of which a robust system can be obtained. In this article, the author has designed a fuzzy logic-based braking system with the help of which self-driving cars can become safer than ever.

The other most important part of self-driving cars of the fuzzy logic system is the control of speed and turn of the steering. For this purpose, a research group makes all the calculations in an article (Shukla & Tiwari, 2010). In this article, the author with the help of robotics calculates the turns of the steering wheels. As we know that there are 360 degrees in one round so a complete fuzzy logic control system is required to make a system that is efficient enough so that the turn of the car becomes smooth. Like in braking, speeding, and positioning as discussed earlier turn of steering is also very important in self-driving cars. In self-driving cars making everything smooth is a challenge so in this article, the author has introduced a fuzzy logic control system with the help of which the turn of the vehicle becomes smooth so that the user can observe each and every turn on each position on their mobile phones and track their vehicles.