Artificial Intelligence (AI) has swayed how most of the people around us engage in routine activities by assessing and designing advanced and recently emerged hi-tech applications and gadgets, called “Intelligent agents”. These agents have a great potential to perform their assigned tasks intelligently without any human interference. GO-BOTs are one of these advancements. GO-Bots are AI-programmed, “Human-computer interaction (HCI)” models.

What is a Goal-Oriented Chatbot (GO-Bot)?

A “goal-oriented chatbot (GO BOT)” provides solutions to resolve some of the specific problems and challenges that the end-user faces. These Go-Bots assist in booking a ticket, finding a reservation, and more.

Since this article is more about the training of the GO-Bot, there exist two ways to train them.

Training of GO BOTs using “Deep Reinforcement Learning (DRL)” is considered to be an innovative research field having a variety of practical applications.

The GOT-BOT dialogue system via “Deep Reinforcement Learning (DRL)” has been split into three major parts [4]:

In addition to the above mentioned, the DM unit is segmented into further two systems known as “Digital State Tacker (DST)” or the “State Tracker” and the “Agent Policy”, and it is represented with the help of a neural network in most of the cases. 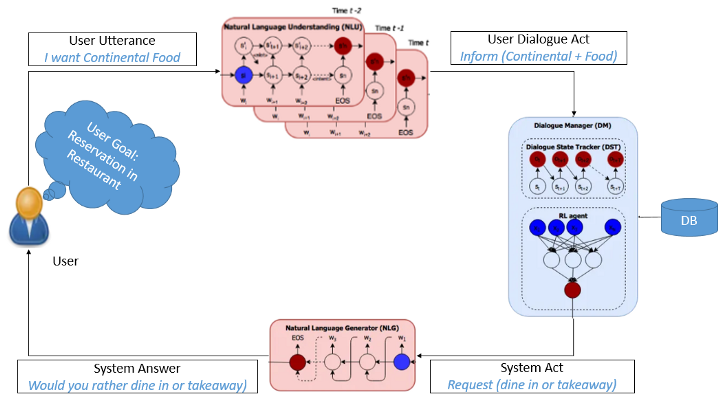 In the diagram above, it can be seen that the user or a client expresses his/her desire to be completed which is processed with the help of the NLU Unit into the semantic frames. Semantic frames are considered to be the lower-level processing or the representation of the Natural language expression that the agent processes. In the next step, the DST converts or transforms the “user dialogue act”, which is also considered to be the semantic frame, along with the history of an existing ongoing conversation to that of the state representation which is utilized by the policy of the agent. After that, the current state is given as an input to the neural network or the policy of the agent which results in the action in semantic frame form.

In this case, the database (DB) can also be probed or demanded in order to further add the information to that of the action of the agent like demanding the info about movie tickets or booking a table in a restaurant.

After gaining the information from the database, the agent action (also considered to be the system action in this case) is dealt with by the NLG element/ unit that transforms the info into the natural language so that the user can easily comprehend and understand what he has asked for.

The user simulator is considered to be the “deterministic rule-based simulator” that endeavors to model itself to the real or actual user. In this scenario, it is said to be based on the model of user agenda where it utilizes the internal state representing the constrictions as well as the requirements of the user simulator.

Through this internal state, the track of the recent and ongoing conversation along with the other basic requirement to complete the user goal is kept. The user goal is randomly selected from all of the available lists of user goals in which the goal is comprised of a complete group of limitations as well as other information which controls and leads the user simulator actions since it tries to fulfill the existing user goal. While tracking the user goal of the current conversation, the “error model controller (EMC)” is utilized to put a few errors within the action of the user simulator at the semantic frame level that is used to enhance the training outcome.

It is highly significant to comprehend and understand the framework of action while training GO-BOT. Here, the user simulator, as well as the agent, are considered as input and output action as semantic frames, if the NL language is ignored. It must be noted that action is comprised of the intent, inform as well as request slots. Slots are referred to as the keys, value pair that intends to the requestor single inform.

Training of the whole system is comprised of four significant parts:

Different stages that are followed for completing one loop of the system are described below:

How Algoscale can assist in training your Go-Bot?

We hope that this article has been of significant help to you in understanding the training of GO BOTS. During the pandemic, almost all businesses have allowed their employees to work remotely. However, there are some circumstances where customers require 24/7 assistance. It becomes difficult for the employee to assist their clients and customer for such a long period. Therefore, many businesses have adopted GO BOTs to tackle these kinds of situations by providing AI-driven solutions to the customer.

Algoscale provides its services by connecting to businesses in this domain. If any business is looking for help regarding the training of GO Bots, then Algoscale is here to help you. We provide our customers with the best possible outcome concerning GO Bot training.

Table Of Contents
1 What is a Goal-Oriented Chatbot (GO-Bot)?
2 GO-BOT Dialogue System Flow
3 Rule base Simulator (User Simulator)
4 Action Framework
5 Agent Training
6 How Algoscale can assist in training your Go-Bot?